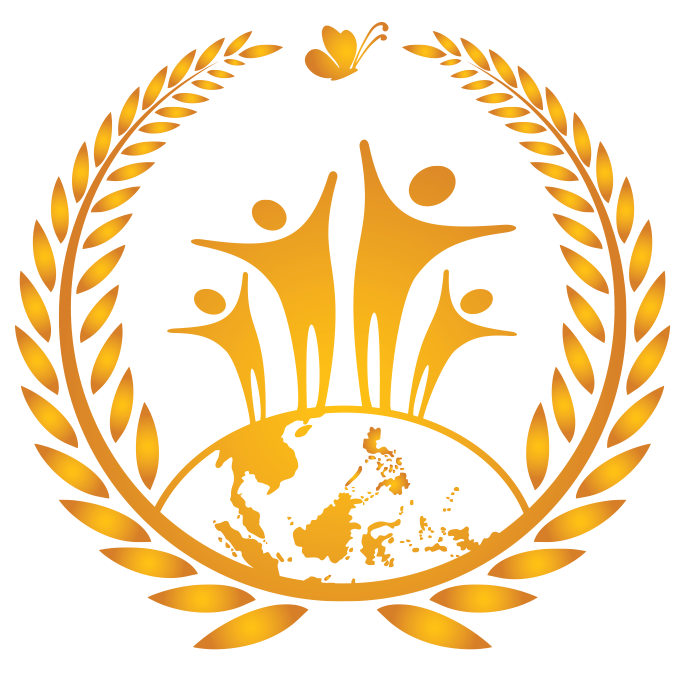 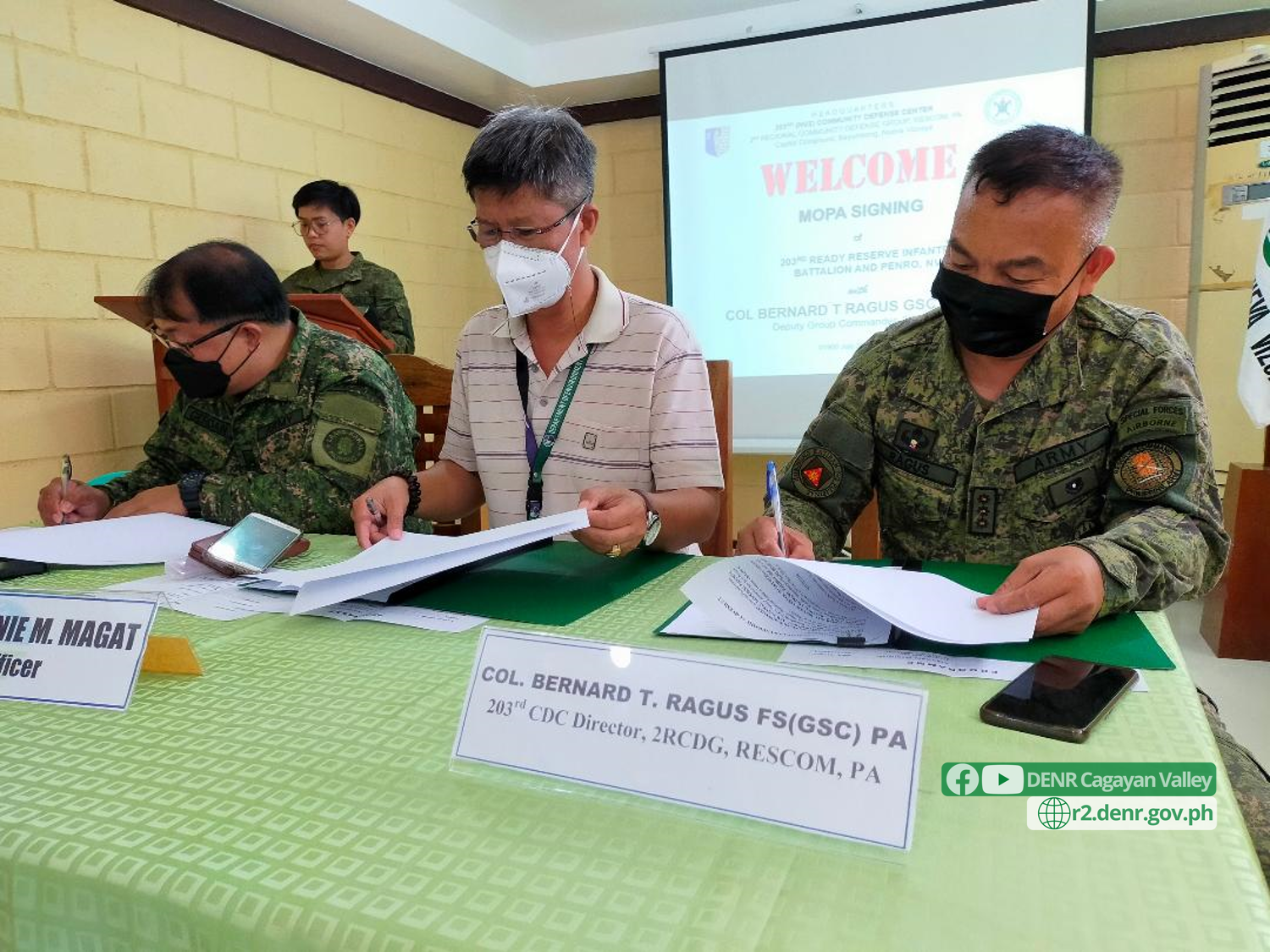 The Provincial Environment and Natural Resources (PENR) Office in Nueva Vizcaya forged today a Memorandum of Partnership Agreement (MOPA) with the 203rd Community Defense Center (CDC) of the Philippine Army (PA) for forest development at the DENR Ecological Park and Training Center in Aritao town.

PENR Officer Giovannie Magat and CDC director Bernard Ragus inked the MOPA to enrich the existing plantations and regreen denuded lands and cogonal areas within the eight municipalities covered by the PENR Sub-Office.

"The DENR is always ready to extend technical assistance in your endeavors and provide you quality planting materials to ensure high survival of your plantations," said Engr. Magat expressing his support to the greening endeavors of the PA.

He further appealed for the support of the uniformed personnel in forest development and protection.

For his part, Col. Ragus assured their commitment to the environment programs through 'bayanihan spirit'.

Former Provincial Board Member Flodemonte Gerdan, an army reservist, also expressed his hopes that illegal activities within the forest plantations will stop through the partnership.# 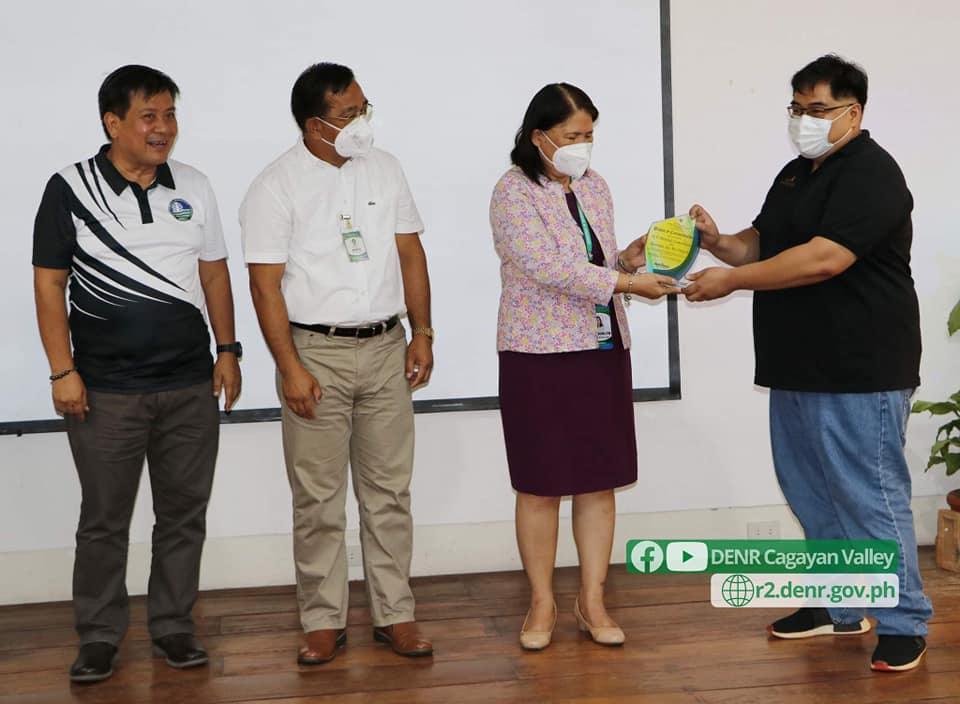 The Department of Environment and Natural Resources (DENR) Region 2 has awarded more than 100 environmental partners during the culminating activity of the Philippine Environment Month held yesterday in Tuguegarao City.
For awardees in Environmental Management Bureau (EMB) programs, the Divisoria High School in Santiago City, Isabela was recognized for having its institution sustained as the most eco-friendly school in the Philippines since 2017; while the Isabela Biomass Energy Corporation in Alicia and Cagayan Biomass Energy Corporation in Burgos, both in Isabela were commended for converting wastes to energy projects and for being compliant to environmental laws, rules and regulations.
The local government unit (LGU) of Luna, Isabela was recognized being the first to install and operate a continuous real-time air ambient monitoring program of the EMB.
The city government of Santiago in Isabela was also awarded for its support in environmental protection and conservation.
The EMB appreciated the FCF Minerals Corporation in Runruno, Quezon in Nueva Vizcaya; and Didipio OceanaGold Philippines Inc. (OGPI) located across the provinces of Quirino and Nueva Vizcaya for donating bamboo propagules during the simultaneous nationwide tree planting activity conducted within the Water Quality Management Areas of the region.
The OGPI and some of its personnel were also awarded for their assistance in the conduct of Emergency Preparedness and Response, Fire Fighting and First Aid Application Training last June, this year.
Meanwhile, the Mines and Geosciences Bureau commended the OGPI, FCF Minerals and Dinapigue Mining Corporation for each attaining millions of safe man-hours without lost time accident from Feb. 17, 2017 to May 2022. This significant milestones of mining companies is recognized globally as a key indicator of a company’s safety performance.
The three mining companies were also recognized for their continued implementation of programs in environmental protection, social development, and health and safety.
“I thank the FCF Minerals mining company for the establishment of the three-hectare regional arboretum in Aritao, Nueva Vizcaya as a result of our forged partnership aims to replenish the trees cut covered with permits with comprehensive site development of denuded forest lands. We now have additional 190 hectares of agroforestry and tree plantations out from this initiative alone," said Regional Executive Director Gwendolyn Bambalan of the DENR.
As direct partner- implementers of forest protection and law enforcement in the different provincial and community environment and natural resources offices, uniformed personnel, local government chief executives and officials, academe, and civil society organizations in the region were recognized for their strong involvement and commitment in achieving strengthened environmental law enforcement and intensified forest protection and anti-illegal logging campaign of the Department.
“These environmental partners are our strengths as we work with them hand in hand not only in enforcing forest protection and environmental laws but also in implementing development programs in forest and watershed, protected area and biodiversity, coastal and marine ecosystems, handog titulo, and Cagayan River restoration,” RED Bambalan said.
Joining the regional environment chief in the awarding of plaques and certificates to partners and stakeholders were Regional Directors Nelson Honrado and Mario Ancheta, Assistant Regional Executive Directors Marcos Dacanay and Ismael Manaligod, and Provincial Environment and Natural Resources Officers of Cagayan, Isabela, Quirino and Nueva Vizcaya.# 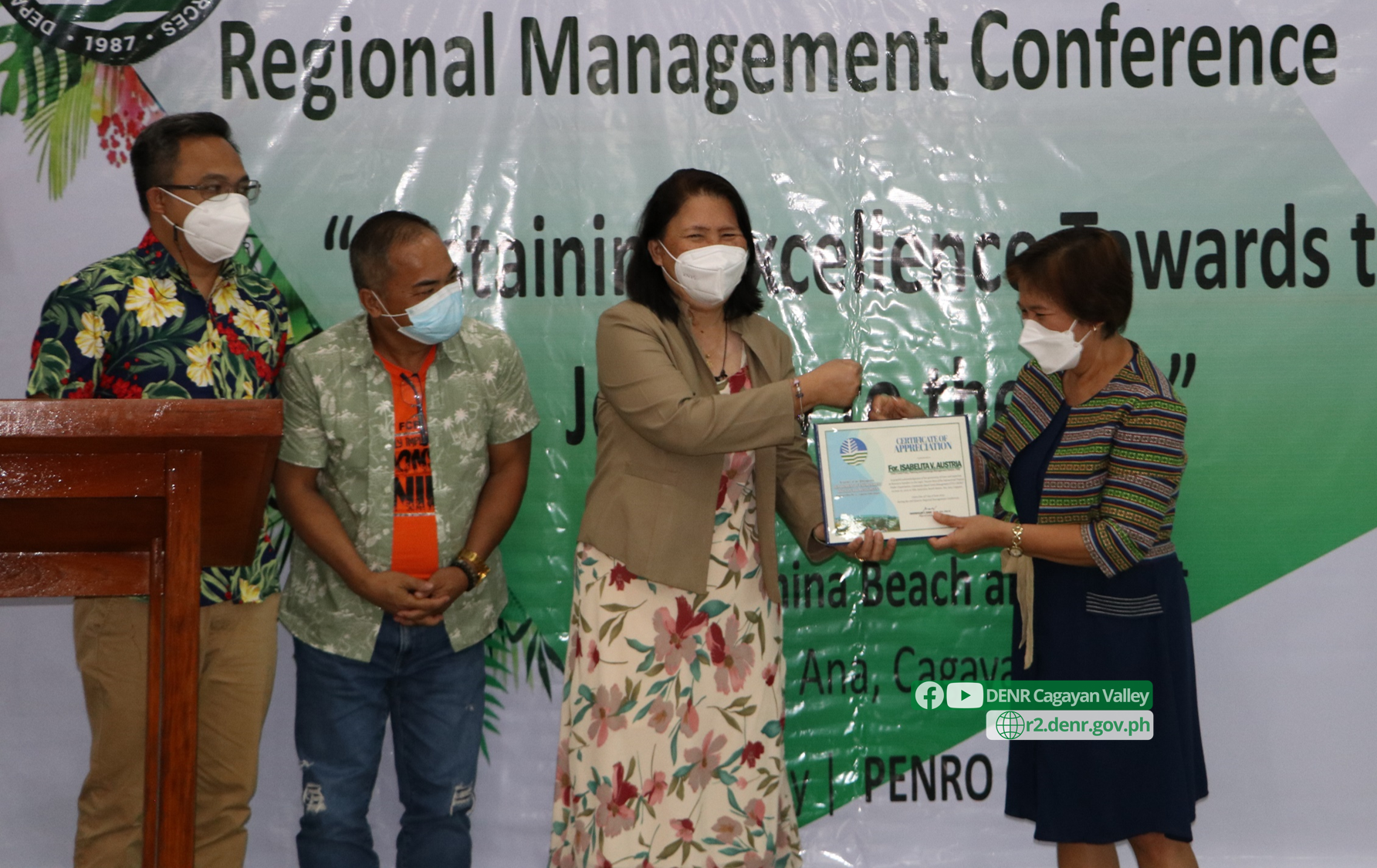 Regional Executive Director Gwendolyn Bambalan of the Department of Environment and Natural Resources (DENR) Region 2 has lauded the progress of online performance monitoring system to facilitate the monitoring of projects implemented in the region.
“The online performance monitoring system aside from it is one way to adapt in our new normal situation, serve as a tool to get fast but accurate data that will improve the delivery of our services to the public,” RED Bambalan said during the recently concluded regional management conference held in Sta. Ana, Cagayan.
In her message, she commended the creation of an online job application that will be launched soon. “This will promote paperless transaction and easier access for our job applicants. It will also provide transparency in the selection and promotion process,” she added.
RED Bambalan also appreciated the environmental monitoring and network center recently launched by the Environmental Management Bureau to monitor the compliance of industries on environmental quality management.
The automated process of monitoring the implementation of various programs of the Department is in support of the government’s Program to Institutionalize Meritocracy and Excellence in Human Resource Management.
The regional environment chief also directed to strengthen the monitoring and evaluation of the ten priority programs of the Department.
In the conference, the physical and financial accomplishment reports of the different offices were discussed to ensure the timely and smooth project implementation in accordance with environmental policies and procedures.
Other discussions include sharing of community-based forest management project in Nueva Vizcaya; accounting procedures on de-recognition of plant, properties and equipment; draft regional guidelines on chainsaw registration; and manual of authorities on technical and administrative matters.
Meanwhile, Sangguniang Bayan Delfin Nepomuceno who represented Mayor Nelson Robinion vowed the local government’s support to environmental programs implemented in the municipality.
The DENR officials also planted more than 50 bamboo seedlings in celebration of the Philippine Arbor Day.
Bamboo planting protects watersheds and riverbanks while building climate resilient communities. It also provides livelihood opportunities through the many uses of bamboo such as crafts, houses, medicine, food, among others.
Joining RED Bambalan in the conference were Assistant Regional Executive Directors Ismael Manaligod and Marcos Dacanay, Regional Director Nelson Honrado, Provincial and Community Environment and Natural Resources Officers, Division Chiefs, and other DENR personnel.# 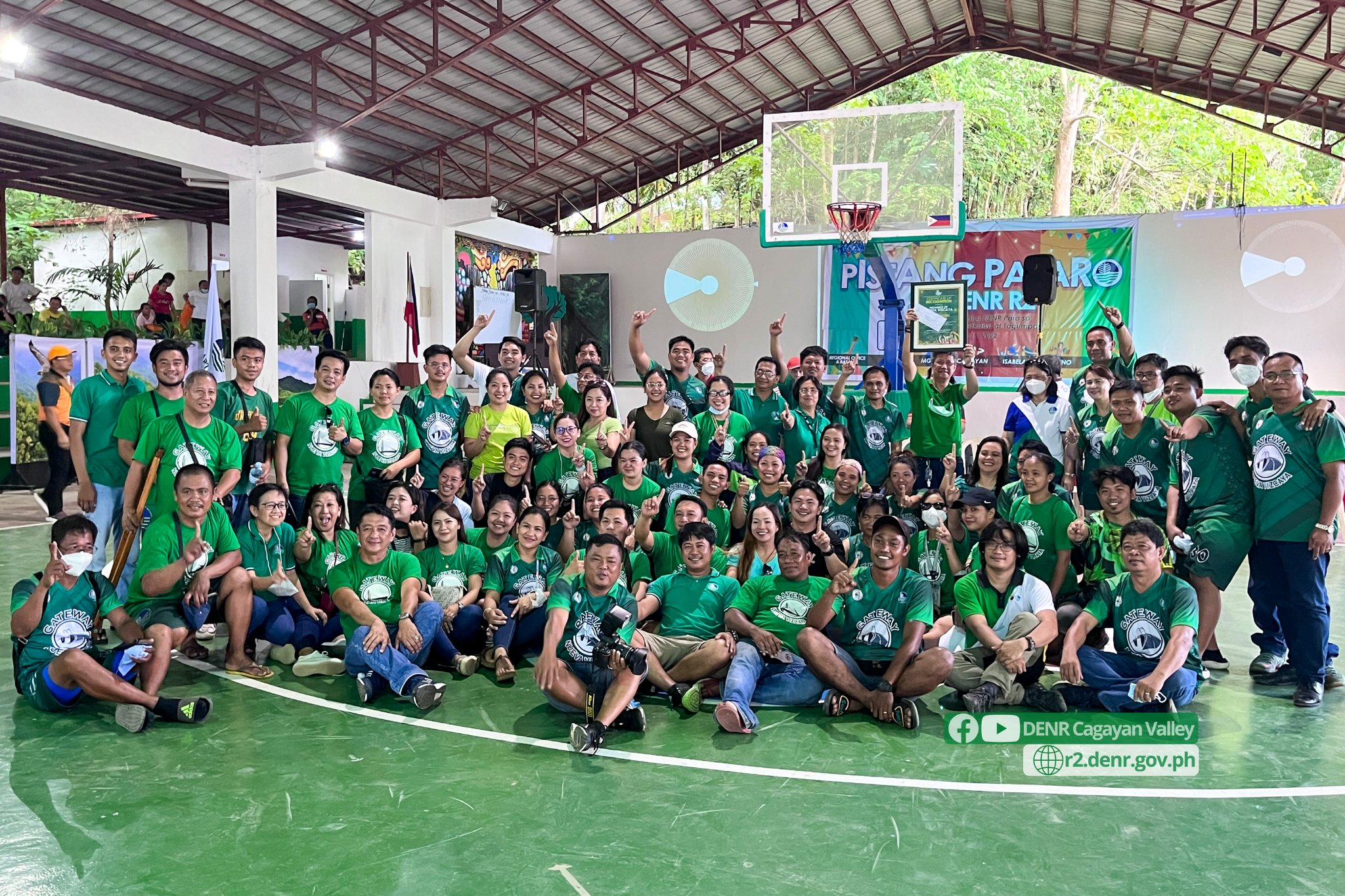 The Provincial Environment and Natural Resources Office (PENRO) of Nueva Vizcaya headed by Engr. Giovannie Magat has emerged as the Pistang Palaro sa DENR R2 overall champion during the awarding ceremony on June 17, this year in Tuguegarao City.
PENROs Isabela and Cagayan were awarded as the 1st and 2nd runners up, respectively.
The event was part of the celebration of the Philippine Environment Month led by the Department of Environment and Natural Resources (DENR) Cagayan Valley.
With the theme, ‘Pistang Pamilyang DENR para sa Tuluy-tuloy na Pagkakaisa at Tagumpay’, the three-day event conducted in line with the 35th Founding Anniversary of the Department highlighted unity, sportsmanship and camaraderie among DENR officials and employees.
In her message, Regional Executive Director Gwendolyn Bambalan of the DENR underlined the significance of unity and cooperation to succesfully attain the organization's goals. “Kapag nagtutulungan, siguradong may progresong mangyayari,” she said.
Director Bambalan also thanked her DENR R2 family for supporting her leadership in the region. “Marami na po tayong nagawa and I hope we can do more. I could not do it without your support and cooperation,” expressed RED Bambalan.
Seven teams competed in various events namely, Regional Office and Batanes; Environmental Management Bureau (EMB); Mines and Geosciences Bureau; Cagayan; Isabela; Quirino; and Nueva Vizcaya.
An executive game was also held to promote physical fitness as it plays important role in employees' health, well-being and quality life thereby would increase productivity in the workplace.
Among the contested events were basketball, volleyball, badminton, amazing race, darts, scrabble, chess, vocal solo, vocal duet, cultural dance, evolution dance and extemporaneous speech.
During the closing program, some personnel were awarded with certificate of completion after finishing the Basic Training Course for DENR Environmental Monitoring Officers and Pollution Control Officers conducted by the EMB on May 23-27, this year.
The committee of the regional sportsfest was headed by Assistant Regional Executive Director for Management Services Ismael Manaligod.# 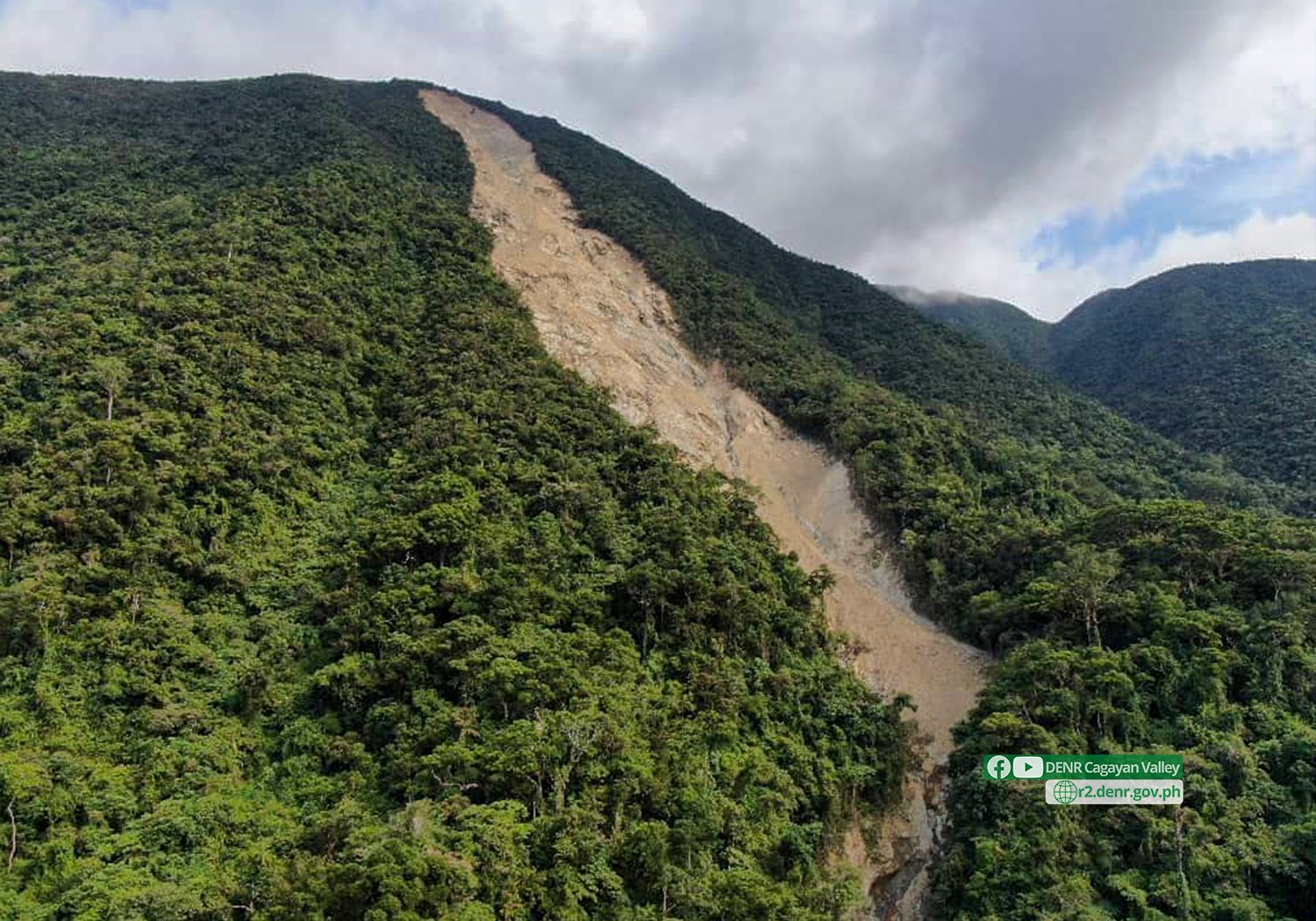 The Department of Environment and Natural Resources (DENR) Region 2 has reiterated that there is no illegal activities traced in the landslide incident in Sierra Madre.
In a press briefing recently conducted, Regional Executive Director Gwendolyn Bambalan of the DENR said the landslide incident which covers approximate average width of 90 meters and total height of 1,592 meters above sea level took place at Sitio Dioriong, Barangay Villa Gracia, Maddela, Quirino.
"The landslide incident was a natural tendency due to heavy rains,” said Director Bambalan.
Per report of the investigating team composed of personnel from the Community Environment and Natural Resources Offices of San Isidro in Isabela and Nagtipunan in Quirino; and local government units of San Agustin and Maddela towns, the area is covered with mossy forest and limestone rock formation within the Quirino Protected Landscape.
The team also discovered bedrocks and boulders along the Sili Creek found at the foot of the incident area; and discolored flowing water from the top of the landslide site.
RED Bambalan emphasized the absence of inhabitants or community in the area and no traces of illegal activities found in the site and nearby areas as revealed by the ground investigating team who trekked for almost a week to reach the landslide exact location.
To ascertain the condition of the uppermost area of the mountain and determine what possibly caused the landslide incident, the DENR together with the Mines and Geosciences Bureau has scheduled aerial surveillance in coordination with proper authorities.#