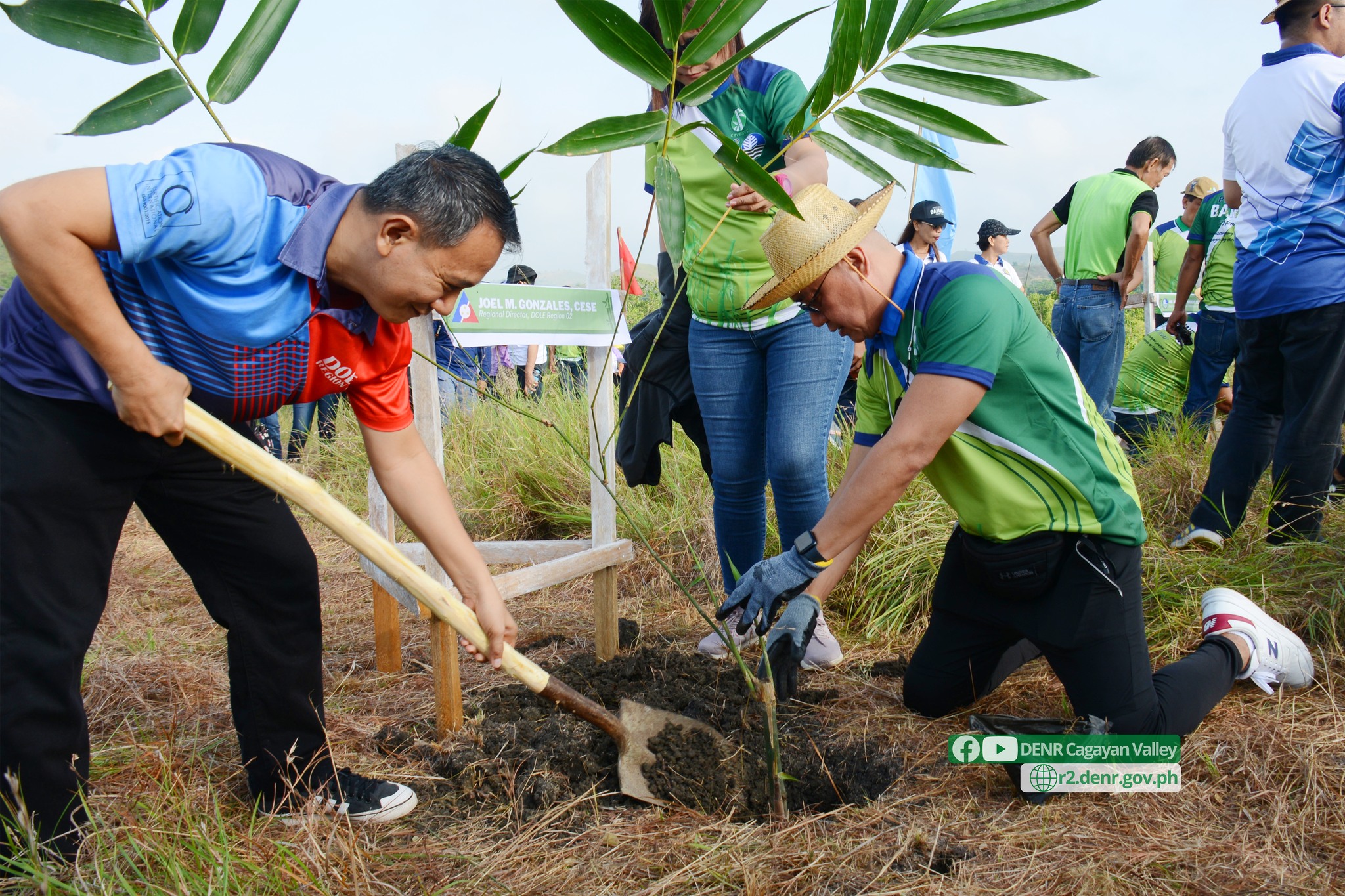 In an interagency effort to promote bamboo for environmental and economic development in Region 2, a simultaneous bamboo planting activity was conducted today in line with the celebration of Philippine Bamboo Month and World Bamboo Day.
With the theme “Industriyang Kawayan, Para sa Paglago ng Ekonomiya at Kalikasan,” the bamboo growing activity was spearheaded by the Department of Trade and Industry (DTI) and the Department of Environment and Natural Resources (DENR) in partnership with national government agencies and other institutions.
More or less 33,000 bamboo seedlings and propagules were planted by government employees and other volunteers covering a total of 189 hectares in 27 sites in the entire region.
Of the total sites, the DENR planted more than 7,000 in 16 sites covering a total of nearly 40 hectares.
“We promote bamboo because this is proven effective climate change mitigating crop. Bamboo plantations are carbon sinks and aid riverbank stabilization,” said DENR Regional Executive Director Gwendolyn Bambalan during the program briefing before the planting activity held in Lannig, Solana, Cagayan.
She added growing bamboos are source of livelihood and can eventually boost economic development through the production of bamboo lumber which is now considered a growing industry. “We look forward that Region 2 will soon become supplier of bamboo lumber to our neighboring regions,” she hoped.
DTI Regional Director Leah Pulido-Ocampo claimed that with the interagency efforts in promoting the bamboo industry, both the environment and the economy will be restored.
“Let us make Cagayan Valley Region more vibrant and we aim for a more sustained participation in the bamboo value chain globally,” the Director enthused.
For the part of the Department of Labor and Employment, Regional Director Joel Gonzales committed to deploy graduates from their Government Internship Program for the monitoring and maintenance of the planted bamboos.
“Bamboo is a sustainable alternative resource for wood and it has a great potential in addressing economic needs,” said Cagayan Provincial Administrator Maria Rosario Mamba-Villaflor who also supported the activity on behalf of Governor Manuel Mamba.
Solana Mayor Jennalyn Carag represented by municipal ENRO Mary Jane Camayang also supported the growing of bamboo in Solana town.
Aside from the government agencies, partners who joined the activity regionwide include local government units, members of the academe, people’s organizations and other non-government organizations.# 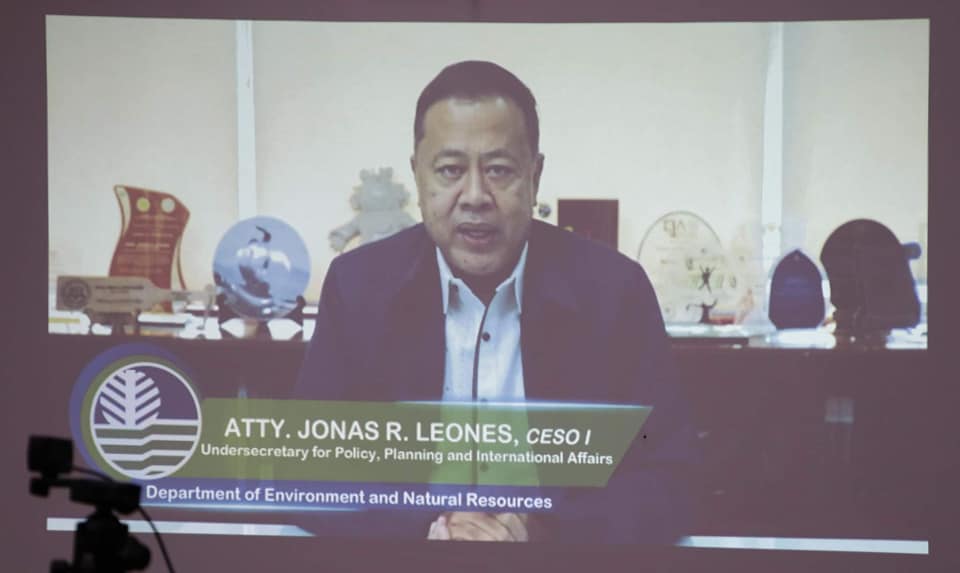 “Commit to climate-proofing and new set climate lens in the formulation of policies of the Department of Environment and Natural Resources (DENR).”
Undersecretary for Field Operations for Luzon, Visayas and Environment Juan Miguel Cuna emphasized this during the recently concluded management conference of DENR Region 2 at the Go Hotel, Tuguegarao City.
USec Cuna underscored the benefits of climate-proofing to DENR’s strategic development plans and projects to ensure that actions to reduce climate-related risks are integrated and harmonized with sustainable development and initiatives of the Department in its pursuit to environmental protection and management.
He also emphasized to engage with multi-sectoral stakeholders and other related environmental sectors for the reduction of greenhouse gas emissions and less use of plastics and plastic bags.
“We have to work with local authorities, planners and developers to create better and safer places,” Atty. Cuna said as he encouraged the key officials to walk the talk towards climate-proof environment protection and conservation programs and to start making change in their respective offices.
In his message, Undersecretary for Policy, Planning and International Affairs Jonas Leones discussed the five priority directions of the new administration such as accounting of the country's natural resources; building of resilient communities; working with cities; implementing practical climate change adaptation measures; and protecting indigenous species and harnessing them for the country's benefits.
“Let us continue to collaborate with our partners to strengthen our mitigation activities against climate change,” Atty. Leones stressed.
Meanwhile, Regional Executive Director Gwendolyn Bambalan, who was commended for her commitment to pursue the region’s thrusts and directions, instructed the regional executives to fast track the accomplishment of targets before the year ends. “We should mean excellence in all we do,” she enthused as she acknowledged the virtual presence of the two undersecretaries for their motivating messages.
The three-day regional management conference with the theme “DENR Region 2 Promoting Science-Based and Climate Change Resiliency Approach in ENR Management" has paved the way to resolve issues and concerns on the implementation of management and technical programs which were presented by Assistant Regional Directors, Bureau Regional Directors, PENR and CENR Officers and Division Chiefs.
"We put in consideration not only on number of accomplishments alone but on how to also become an environmental stewards in democratic, excellent and scientific ways,” Director Bambalan added.
The regional environment chief also thanked the presence of Cagayan Governor Manuel Mamba and Tuguegarao City Mayor Maila Rosario Ting-Que, who both demonstrated their support to DENR programs and projects.
Gov. Mamba was guest speaker during the fellowship night dubbed "DENR portraying super heroes and cartoon characters."
The DENR key officials have also planted 100 Narra seedlings in Namabbalan, Tuguegarao City in support of the National Greening Program of the Department.# The Department of Environment and Natural Resources (DENR) Region 2 leads environment stakeholders in a global movement for a trash-free seas.
In the simultaneous International Coastal Cleanup (ICC) celebration held today, more or less 5,400 kilograms of non-biodegradable and residual wastes were removed in various cleanup sites with a total of 43.5-kilometer stretch along the coastal areas, rivers, and esteros regionwide. These trash collected were properly disposed in coordination with the concerned local government units (LGUs).
In Tuguegarao City, Regional Executive Director Gwendolyn Bambalan of DENR Cagayan Valley, who spearheaded the cleanup along the Pinacanauan Avenue stressed proper management of waste which must start from the households and community to avoid litter draining to waterways and marine environment.
"We appeal for your support and cooperation to refrain from littering anywhere and to end the flow of trash from the source," Director Bambalan said as she emphasized that the bulk of solid wastes are land-based and originated from residential areas.
The regional environment chief appreciated the presence of participating groups in the said endeavor. "The DENR needs your support in our programs because cleaning the environment is a shared responsibility," she added.
Bureau of Fisheries and Aquatic Resources Regional Director Angel Encarnacion and Tuguegarao City ENR Officer Marcelino Gumabay have manifested support to take part in reducing waste for healthier major tributaries.
Punong barangays Lucas Ballad and Mariano Baylon of Centro 9 and 10, respectively, in the said City committed to conduct regular cleanup along the Pinacanauan River which is the most flood-susceptible area during occurence of heavy rains and strong typhoons.
The DENR-led cleanup has mobilized 2,290 DENR employees and partners from the local government units, national government agencies, law enforcement groups, and academe.
This was successfuly conducted in 25 designated cleanup sites namely; Charatayan and San Antonio in Basco, Panatayan in Mahatao, Malakdang in Sabtang, Radiwan in Ivana, Imnajbu in Uyugan, all in Batanes; Balzain-Caritan Creek and Pinacanauan Avenue in Tuguegarao City, Masisit in Sanchez Mira, Punta in Aparri, San Vicente in Sta. Ana, San Jose in Baggao, Tupang in Alcala, Anquiray in Amulung, all in Cagayan; Baculud in City of Ilagan, Palagao and San Jose in Jones, Carabatan Chica in Cauayan City, Digumased in Dinapigue, Diddadungan in Palanan, Diana in Maconacon, Antagan 1st in Tumauini, all in Isabela; San Pedro and Villa Agullana in Maddela, Disinaba Bridge to Ganano Bridge in Diffun, all in Quirino; and Benay River and Bagumbayan in Dupax del Sur, Banganan in Aritao, and Baringin in Bayombong, all in Nueva Vizcaya.
DENR Assistant Regional Directors, Bureau Regional Directors, and provincial and community environment and natural resources officers also led the event in the different field offices.
The ICC is celebrated in the Philippines every 3rd Saturday of September by virtue of Presidential Proclamation No. 470 s. 1993.# 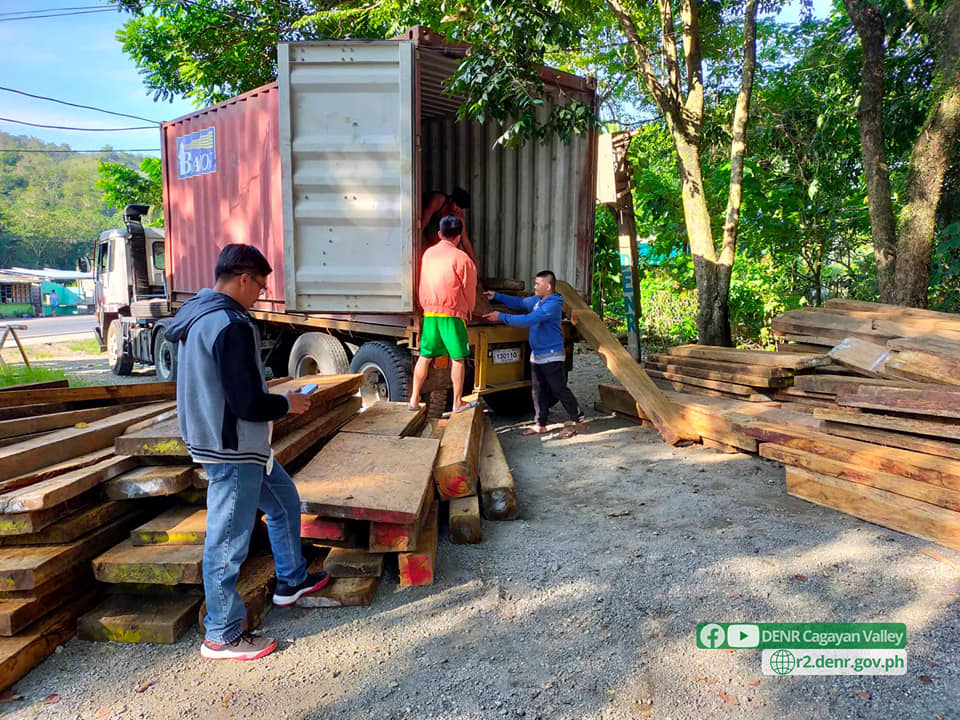 “I would like to appeal to the public to report to the nearest DENR Office any environmental illegal activities for us to alert our concerned officials and conduct immediate verification or investigation to reported issues."
Regional Executive Director Gwendolyn Bambalan of the Department of Environment and Natural Resources (DENR) Region 2 emphasized this as she ordered more vigilance against illegal logging in Cagayan Valley following the two apprehension incidents that happened in a row in the province of Nueva Vizcaya.
On Sept. 14, this year, the PENR Office of Nueva Vizcaya through the Cagayan Valley Product Monitoring Station (CAVAPROMS) again apprehended over four million-peso worth of Narra lumber.
The Narra lumber, loaded in a 14-wheeler cargo truck, was intercepted by DENR personnel stationed at the south exit monitoring point located in Barangay Calitlitan in Aritao town.
“I was alarmed of these apprehension incidents. I always order the DENR enforcement group to be proactive in forest protection. I told them that our approach is preventive rather than confiscation. Nonetheless, I commend the PENRO through the CAVAPROMS team headed by Development Management Officer III Jay Marshal Jasmin for being vigilant in manning the checkpoint,” RED Bambalan said in a radio interview yesterday.
She said although the contraband forest products were not originated in Region 2, the region is strengthening the forest protection convergence initiatives with Region 1 and Cordillera Administrative Region for a stringent anti-illegal logging campaign of the Department.
Earlier in her directive, the regional environment chief has been ordering all forest protection officers manning the checkpoints in the region to ensure that no conveyance or forest product without transport permit shall pass through the checkpoint.
In his verification report, Jasmin said the 281 pieces of lumber with a total volume of 8,155 board feet were undocumented and had no legal travel documents which originated from Barangay Buwaya, Balbalan in Kalinga province.
The three individuals manning the truck are now under the custody of Aritao Police Office for investigation.
On Monday, two Hi-ace vans loaded with Narra lumber with an estimated value of almost 1 million pesos were apprehended by the DENR and the Philippine National Police (PNP).
RED Bambalan appreciated the support of PNP Sta Fe, Nueva Vizcaya, and PNP San Nicolas, Pangasinan for the successful hot pursuit operation last September 12.# 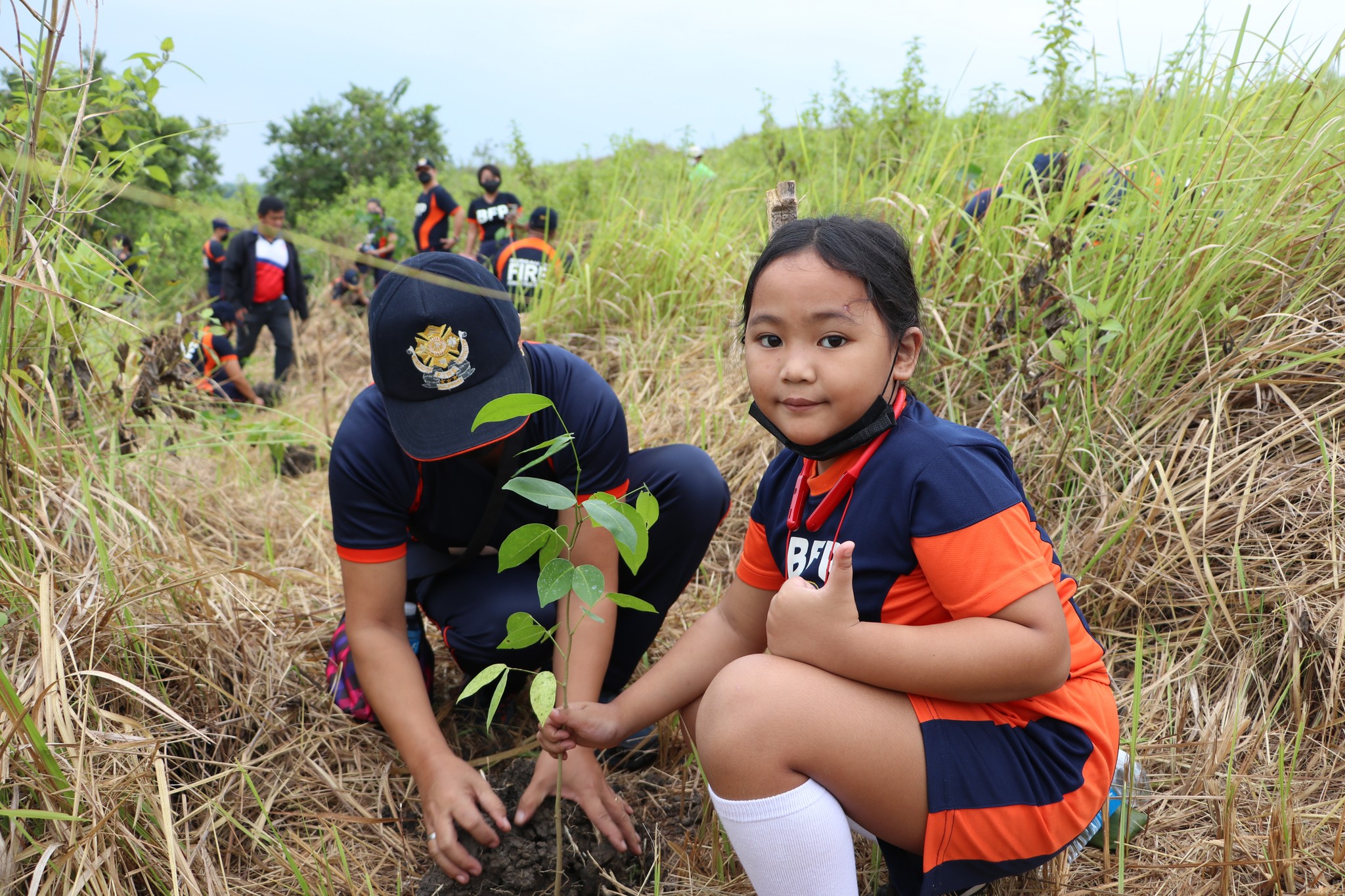 Around 2,000 volunteers in Cagayan Valley planted over 7,000 bamboo propagules and indigenous tree species today as part of the simultaneous nationwide bamboo and tree growing activity jointly initiated by the Department of Environment and Natural Resources (DENR) and the Department of the Interior and Local Government (DILG).
The activity with the theme “Buhayin ang Pangangalaga sa Kalikasan” was conducted to heighten actions to reduce the ill effects of climate change through massive reforestation activities.
The tree growing event also supported by the Department of Agriculture (DA), Department of Trade and Industry (DTI), and Department of Labor and Employment (DOLE) aims to strengthen collaborative efforts by engaging national government agencies, local government units, and other stakeholders in environmental protection programs.
DILG Regional Director Jonathan Paul Leusen Jr. expressed his gratitude to all the planters. He said the activity serves as a gift to President Ferdinand Marcos Jr. who is celebrating his birthday today.
Regional Executive Director Gwendolyn Bambalan of DENR Region said the department is promoting tree growing to encourage the participants not only to plant but to ensure the survival of the planted seedlings.
“Our mandate is to mobilize the citizenry and we are happy to see many volunteers today as we address the pressing issues of climate change,” she added.
Among the planted species were bamboo, Narra, Molave, Tuai, Talisay, Bitaog, Kupang, Malasantol, Kamagong, Dao, Ipil and Arius.
The planting was simultaneously held in five sites namely; Uyugan, Batanes; Quirino, Isabela; Solana, Cagayan; Cabarroguis, Quirino; and Bayombong, Nueva Vizcaya. Batanes Gov. Marilou Cayco and Nueva Vizcaya Gov. Carlos Padilla joined the event in their respective provinces.
The tree growing activity was also attended by the Regional Directors of DA, DTI, and DOLE.
It was also participated in by officials and representatives from other government agencies, local government units, barangay and sangguniang kabataan officials, civil society organizations and academe.#