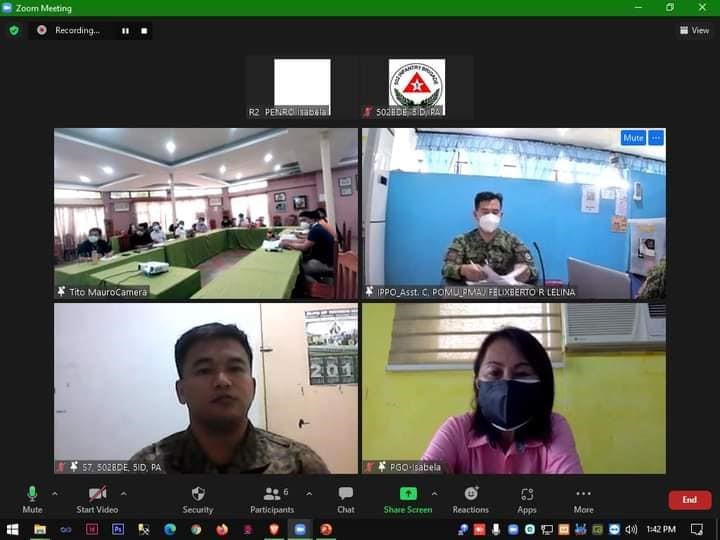 GAMU, Isabela - Member Agencies of the Provincial Environment Law Enforcement Council (PELEC) recently convened at the Piazza Zicarelli in Gamu to discuss the means to strengthen cooperation on law enforcement in the province.

In her opening remarks, Atty. Elizabeth Binag, the representative of the PELEC Chairperson Governor Rodolfo Albano III, said whatever transpired in the meeting will be disseminated to the Governor for the latter’s information.

Senior Ecosystem Management Specialist Baltazar Ranin presented cases filed in court and the Modus Operandi of timber poachers. At the same time, Environment and Natural Resources Officer Geronimo P. Cabaccan discussed the composition of the Isabela Environment Protection Task Force as stipulated under the Executive Order of the Provincial Government of Isabela.

Vice Chairperson Provincial Environment and Natural Officer Marlon Agnar thanked the partners for responding to the call of the DENR as he tackled the resolution approving the creation of Legal and Surveillance Committees to strengthen and elevate the DENR’s enforcement mandate.

After the discussion and consultation of the resolutions among members, the Surveillance Team will be headed by the Philippine National Police with the Legal Officers and League of Barangay as members tasked with gathering vital information relative to the conduct of timber poaching and others while the Legal Team will be chaired by the DENR with Legal Officers and 502 Brigade as members that will look into cases filed in court relative to timber poaching and other destructive forest activities.

As suggested during the meeting, an orientation on environmental laws will be conducted for the key staff of the PELEC members to establish a common understanding of the roles and actions to be undertaken.

The group agreed to the inclusion of the National Bureau of Investigation as a member of the council, permanent alternate representatives, and renaming the Isabela Inter-agency Task Force specified in the MOA as Provincial Environment Law Enforcement Council.

The PELEC was established under the Memorandum of Agreement forged by the member council.

As provided in the MOA, the council members declared their cooperation in the provision of fast response to verified reports of environmental violations; and improvement of environmental law enforcement.#RMC